Determining the difference between mono and stereo is an audio engineering skill that even some very capable producers can get confused with. This is a short and sweet entry to clear up the differences.

The word stereo is derived from stereophony, stereo is an acoustic illusion of space and depth. This is created by the use of 2 microphones with 2 discrete separate signal paths. These are panned hard left and right. (mic preamplifiers, mixer channels, power amplifier L and R  channels and L and R speakers)

In this first picture we have a small circle representing a single microphone and a pan pot underneath, panned centrally. This will result in a mono recording. It would typically be recorded to a single mono track in a digital audio workstation. 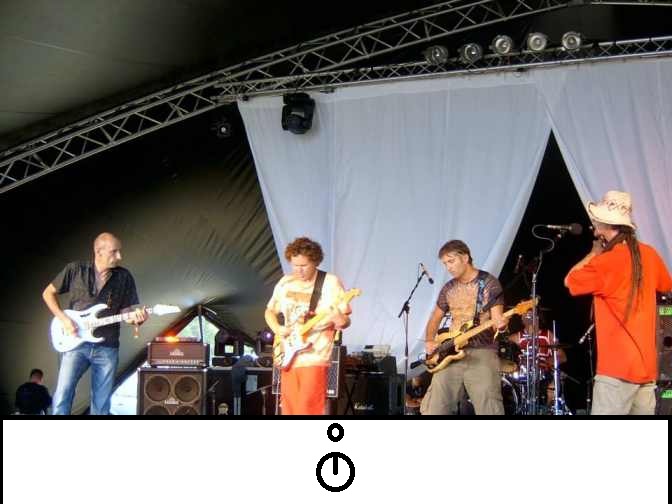 Next we have 2 microphones one to the left and one to the right of the band. Underneath we have panpots panned hard left and hard right respectively. 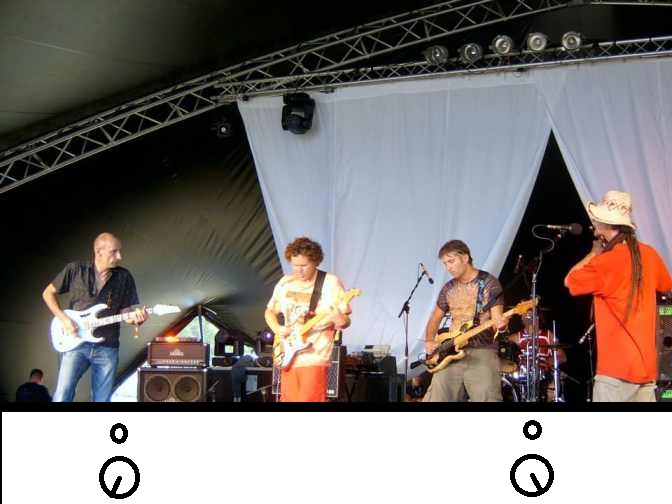 These microphone signals should be recorded through 2 mic pre amplifiers down a discrete mixer channel per mic.  Then fed to 2 separate inputs on a recording device. (i.e. a DAW or portable recorder)  When routed into a sound card the digital audio workstation inputs can be configured. To record a stereo interleaved file on a single stereo (ganged) track. Or 2 mono signals on 2 mono tracks panned hard left and right. This will result in a stereophonic recording.

These 2 microphones are “sampling” the sound field made by the musicians at 2 points in space. One reason for the sense of depth is the time arrival differences of sound sources on stage to the 2 microphones. Examples of which are shown in picture 3 in the form of coloured lines. 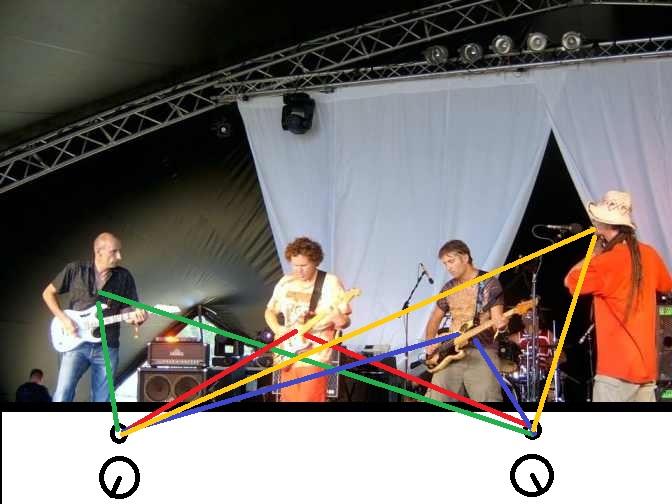 When the resultant recording is reproduced over a stereo capable system you will hear the depth in the recording. This gives a sense of the musicians position on stage. Of course this is over simplified and is just a 2 microphone recording. However it explains the differences easily. (Photo courtesy of Dream Machine)

To add : stereo DAW tracks (or dedicated stereo mixer channels) have balance controls and mono tracks have pan controls. (Be it a DAW mono channel or an analogue mixer channel)

The above clearly defines the difference between mono and stereo with an acoustic recording using microphones.

It makes sense to discuss the file container in which a recording can be stored.

Mono file – file capable of containing mono information only. Just because your DAW is playing the file and you can hear it on both L and R speakers does not mean you are listening to stereo or pseudo stereo. You are just hearing a single mono file being routed equally between L and R speakers.

This seems to cause no end of confusion to those not capable of recognising a stereo file upon playback over headphones or loudspeakers.

I highly recommend using your DAW to practice identifying stereo and mono signals aurally. It is an important skill for a musician, producer and engineer to be able to hear for themselves. You can practice by mono summing your master output when playing back a stereo mixdown. Listen to the difference it should be obvious. Bear in mind the level is likely to jump when summed in mono. So you may need to pull your master fader down to compensate for the channel summing and avoid clipping.

If required you can also get a visual impression of the stereo content of your mix by downloading the free plug in known as “Flux Stereo Tool” if required.  A stereo signal will produce signal that spreads away from the mono centre line towards the +S and -S markings.

Despite the clear differences in the true definition of stereo there are a few situations where you will encounter pseudo stereo. Pseudo stereo is often encountered when using non acoustic sources such as synthesizers and artificial reverberation and other delay based effects processors. Such sound sources create an impression of stereo width/depth by manipulation of synthetic waveforms or the phase correlation between left and right channels. A classic example would be 2 synth oscillators panned hard left and right. With one oscillator very slightly detuned in pitch. In electronic music making there are many ways to produce pseudo stereo width. This can give the impression of a nicely balanced stereo image.

You may wish to read the following article that covers stereo image in mixing in greater detail.

Feel 100pct free to share this on audio forums and social media etc. The more, the merrier !